1. The images contain props and/or costumes known to have been used by the Tonnesen Studio. Once an item appears in a signed Tonnesen print, its presence in an unsigned print suggests the same point of origin. For example, the fancy footstool shown in Album 2 in Tonnesen’s signed print titled “Where Peace Abides,” is a frequent indicator of Tonnesen’s work. Tonnesen used her props over and over, favoring certain chairs, rugs and costumes that can usually be differentiated from those of other studios. One caveat: In some cases, artists or illustrators painted new backgrounds that were not in the original photo, retaining only the central figure from the original photograph. So those items added by the illustrators are their own creations rather than the photographer’s props. In most cases, this technique seems to have pertained to outdoor, non-studio settings. See the first two images in Album 1 where both exterior backgrounds were added by artists – the first, apparently, by Tonnesen herself and the second, very possibly, by R. A Fox. An example of a painted indoor setting is image 4 in Album 3, which can also be viewed close-up in the section titled “Zoomify an Image,” posted by Sumner. In the original photo by Tonnesen, the nursery decor was non-existent. Because Tonnesen signed the illustration, I assume it was she who added the background painting.

2. The original photos exist in the Tonnesen Archive of the Oshkosh Public Museum in Oshkosh, Wisconsin. Not everyone could or would travel to Oshkosh to view the archive, but I have posted a number of the prints that originated from archived photos and will add more as time permits. 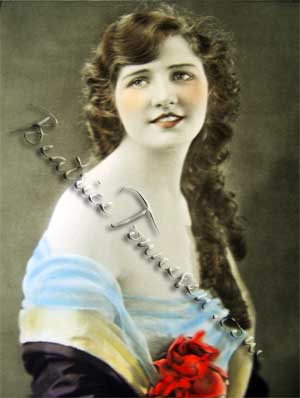 3. The images are in collections of persons connected with Tonnesen, and are identified as products of the Tonnesen Studio.

4. The images were featured and identified in publications of Tonnesen’s era.

5. Child model Betty Crowe is present in the photo or print. The presence of any Tonnesen model in a print or photo hints that it originated with Tonnesen, but it is not a foolproof indicator. Most Tonnesen models worked, at least occasionally, for other studios. However, Betty Crowe, whose image appears both in the Oshkosh Public Museum collection, and in other privately held Tonnesen photos, has stated that she worked only for one photographer – the woman who “discovered” her as she rode a streetcar with her mother in Chicago around 1913. Betty, born in 1910, appears with Virginia Waller, three years her junior, in the image titled “Waiting for their Munsingwear”, the first image in Slideshow Album #1.

Slideshow Album 4 is part of this article. It contains ten images of Tonnesen’s unsigned works and accompanying text. I have many more unsigned images in my collection and will continue to add them as time allows. If readers have others, we’d love to post them.