The twelve images offered are in the small print of the graphic. They are: Grandma’s Tea, The Waif, The Rose, Husking Time, Reflection, Bubbles, Easter Tide, The New Baby, Our Pet, Old Harpist’s Treasure, Baccante, and Delores.

Note the discussion of the use of the platinum print process for the images, also known as a platinotype.

Great Offer for Old and New Subscribers Magnificent Art Collection Free, DELIVERY CHARGES ONLY COST Three Months’ Subscription to the Times and Twelve Tonnesen Pictures for a Dollar. Sample of the Pictures on Display Magnificent Works of Art.

The management of the Trenton Times believes that nothing is too good for its patrons. 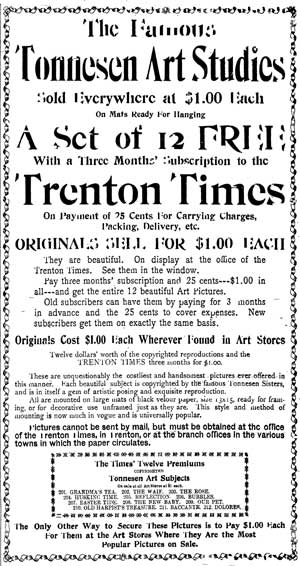 An evidence of this is an offer which is now made to new and old subscribers. It is an offer unparalleled in the local field and an offer in which every one will be interested.

The offer is that of a set of twelve reproductions of the famous Tonnesen art pictures for the unheard of price of twenty-five cents and three months’ subscription to the Times at the usual rate.

In other words, on the payment of $1 the pictures will be delivered free at once and the purchaser becomes a subscriber to the Times for three months.

FOR NEW AND OLD SUBSCRIBERS
Persons who are now subscribers may pay the dollar and secure the pictures as well as extending their subscription three months ahead.

JUST SEND THE DOLLAR.
All that is necessary is to bring a dollar to the Times office. 144 East State street, and the Times will do the rest. Each and every purchaser secures $12 in value for the twenty-five cents expended. The only other way to secure these pictures is to pay $1 each for them at the art stores and they are well worth the money too.

These are unquestionably the costliest and handsomest pictures ever offered in this manner. Each beautiful subject is copyrighted by the famous Tonnesen sisters, and is in itself a gem of artistic posing and exquisite reproduction.

All are mounted on large mats of black velour paper, size 13×15, ready for framing, or for decorative use unframed just as they are. This style and method of mounting is now much in vogue and is universally popular.

Samples of the pictures are now on display in the window of the Times’ business office.

In order to reach this point he must have such command of the lens that it is as plastic in his hands as is color, on the palette of the painter, or clay in the hands of the potter.

The latter-day photography is at its best no mere flat production of a scene or face, but is in some subtle way touched with the power and individuality of the photographer.

The almost unlimited field which this new note in art opens along various commercial lines is a fact that has been grasped by few, even of the leaders in this branch of artistic work. Easily the first in this line stand the Tonnesen sisters, of Chicago. They now occupy the recognized first position in the art world of both this continent and Europe, and the results obtained by them are incomparably excellent.

They were the pioneers in the introduction of successful reproduction of art scenes by photography.

They reasoned that with proper models, costumes and other accessories they could compose even more artistic and beautiful pictures than the average on the market—and produce them at much less than the usual cost.

CHARMING MODELS.
They secured the most beautiful and charming models and proceeded to equip their studio with necessary and most expensive and rich fabrics of the finest textures, beautiful and real jewelry of immense value, specially deigned costumes, millinery, wraps, stage properties, etc., etc.

So instantaneous was their success and so beautiful was the result they obtained that it has been almost impossible for them to supply the demand made upon them from all over the world. This demand necessitates great fertility of composition and a keen and constant observance of life.

Very often in Chicago one may be attracted by a good-looking, stylishly dressed, business-like young woman, continually studying the face and figure of a pretty working girl in a car, or chasing after her on the street.

You may be pretty sure you will see that girl before long in some artistic and taking picture. For you have caught one of the Tonnesen sisters in the act of “securing” one of the famous Tonnesen models.

It frequently occurs that an art dealer will be greatly impressed by a beautiful picture made for a rival firm, and desires one embodying the same theme, and of course equaling or excelling the points of artistic value.

As the two pictures must not be in the least alike, this involves an entirely new conception of the old story, to be told by a different set of models. Therefore, wherever these ladies are they are sure to be studying the manner In which life expresses itself, and if they chance to see a pretty and adaptable child or woman on the street or in the stores they not infrequently follow her home, request an interview and graciously ask for a sitting.

As they have the good fortune to be so well known by their works they are not likely to be met by rebuffs and their life models are taken just as frequently from the home of the millionaire and society leader as from the more humble walks of life.

A study of the Tonnesen Copyrighted Pictures discovers the secret of their phenomenal success. Apparently every one of their models is either handsome or has some distinguished characteristic. Here is where their recognized art comes in. There is always a good line everywhere in everyone’s face, and the Tonnesen sisters make a specialty of finding it and reproducing it.

The most interesting feature of their work is the making of art pictures – artistic groupings, cleverly executed. They have been reproduced in the form of etchings watercolors and many other processes, and are always highly prized and much sought after.

MOST BEAUTIFUL RESULTS.
However, the most beautiful results and the highest decree of their art is reached in their original platinum prints, which sell as rapidly as they can be produced at $1 each, unmounted. On some of their most noted subjects, even printing as they do from 12 to 16 negatives, they are always from 600 to 2,000 behind orders.

The slowness of printing from photographic negative plates by all heretofore known processes (as well as the value of the picture as an art subject), has had great bearing on the cost of production of pictures of this nature.

Within the last few months there has been perfected a process of producing these Tonnesen copyrighted pictures much more rapidly and even a clearer, more beautiful effect is obtained in these multi-platinum prints than is shown in the original picture. These multi-platinums are in no sense reproductions, but are made direct from the original Tonnesen negatives. The Tonnesen sisters do not permit the printing or reproduction of any of their pictures, for fear of cheapening them, and each one bears their signature and is fully protected by copyright.

It is becoming more and more fashionable to use unframed pictures. Scattered around on the walls between framed pictures in drawing rooms, parlors, libraries and young ladies’ boudoirs, the unframed, mounted picture is considered more decorative. It suggests the freshness and the artistic touch of the studio. The Tonnesen copyrighted multl-platlnum prints are mounted on large sized black raw-silk mezzonine mounts, which may be hung against the wall just as they are, or may be in any way framed, as preferred. It is certain that nothing so rich and effective in the way of furnishing has ever been available for decorating.

Pictures cannot be sent by mail. They must be obtained either at the main office in Trenton – or at any of the branch offices in suburban towns.