Beatrice Tonnesen shared her studio with noted artist R. Atkinson Fox during the 1920’s, according to Rita Mortenson, author of two books on Fox. On pages 16 and 17 of R. Atkinson Fox: His Life and Work (L-W Books, 1999), Mortenson writes that Fox “shared a studio with the professional photographer Beatrice Tonnesen on Pine Grove Avenue, south of Diversey Park.” But biographical information on Tonnesen indicates that she and her sister, Clara, set up their studio in 1896 at 1301 Michigan Avenue, with no mention of a second or later studio.

So I set about trying to locate that Pine Grove studio. The archives of the Chicago Tribune yielded two interesting classified ads placed by the Tonnesen Studio. 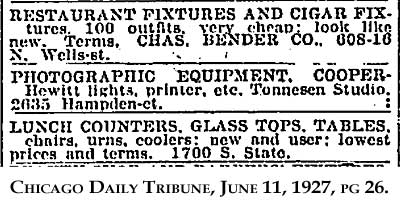 The second ad, placed 6/11/27, offered the following items for sale:

That Hampden-ct. address (now shown as N. Hampden Ct.) is only a block from Pine Grove. I believe that Mortenson got much of her information from the spoken recollections of Fox’s children and friends, so it would be understandable if the larger street, Pine Grove, proved to be more memorable to them than the smaller Hampden- ct.

These classified ads indicate that by 1919, Tonnesen had either moved from Michigan Avenue or opened a second studio, and she remained there at least through 1927. My guess is that this was the “Pine Grove” studio to which Mortenson referred, in which Tonnesen worked with Fox during the 20’s.