Chicago of the 1910's and 20's was a center for the creation and production of advertising and calendar art. Many popular themes – the all-American family at home; children at play; cute kids with their cute pets- called for appealing children who could take direction, and project a sense of comfort and naturalness in front of the camera. Beatrice Tonnesen, a foremost creator of advertising and calendar art, was always on the lookout for promising child models.

Around 1913, she spotted three-year-old, blond Betty Crowe, who was riding a streetcar with her mother. Her recruitment of Betty turned out to be a bonanza for Tonnesen: Betty had a cousin, handsome five-year-old William Redmond, who accompanied Betty and her mother to a photo shoot one day. His visit marked the start of a modeling career that spanned more than a decade.

In early 2007, I located Redmond's daughter, Mary, who had saved a variety of mementoes from her dad's childhood modeling days. Among her collection were photos with notations identifying their studios of origin, and old advertisements featuring a number of Tonnesen models. These have been valuable resources in my efforts to identify Tonnesen's works.

Mary also introduced me to Betty Crowe, who at 96, was still charming and eager to talk about modeling for Beatrice Tonnesen. Information I've gathered from talking with Betty and from access to William Redmond's mementoes, including an oral history, is presented in each of their stories below. To see images from their modeling days, please see Slideshow 8. Additional images of William and Betty appear in Slideshows 1, 2 and 4.

I visited with Betty Crowe in July, 2007. Incredibly, she was still recognizable as the cheery little girl of ninety-plus years ago! She wore her still-blond hair in the same short bob, and she flashed the same bright smile that once lit up Tonnesen's photos.

Betty told me that she modeled for four years, until her family left the Chicago area. She remembers the lady photographer (Tonnesen) as “a real nice lady who loved children.” This, she said, inspired the children to “do their very best posing.”

Although she only modeled until about the age of seven, Betty has some memories of specific events:

Betty remembers her modeling experience fondly, but she never really missed it. She went on to work for the post office, marry and raise two children. She currently lives with a few other seniors in a private home in a pleasant neighborhood near Chicago. There, she enjoys sitting on the large, covered porch on nice days. 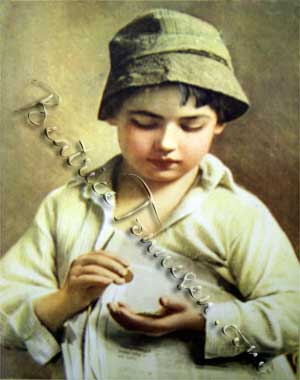 William A. Redmond (1908-1992) modeled well into his teens. He is known to have modeled for the Tonnesen, Keedy and Stadler Studios. A 1986 oral history indicates he worked for others – Underwood and Underwood and Riel – although it is unclear whether he worked as a model or a courier for them, and none of his photos have so far been found marked with their names. William is the only model I've found whose photographic image was used in paintings by two noted calendar artists: R. Atkinson Fox and Rudolph Ingerle.

In addition to his work in calendar art, William modeled for ads for several national companies – Sun-Maid Raisins, Quaker Oats, Johnson Shoes, VanCamp's Beans, to name a few- as well as for Sears and Montgomery Ward catalogues. This exposure led to roles in several commercial motion pictures made by Chicago-based studios to promote national companies.

In his oral history, he reminisced about modeling for still photography. The following excerpt (Illinois General Assembly Oral History Program William A. Redmond Memoir Volume 1, p. 27) is especially interesting to me as a collector of early calendar art, and, I suspect, will also be interesting to antique photography buffs.

“I think one reason I did so much and…lasted so long is that I was small for my age and I could understand and follow instructions probably better than a younger kid…The film wasn't fast enough, so you had to hold still for a certain measurable time. So they had a headrest…they had the old powdered flash lights…they'd ignite it with a spark…and a great big puff would go up and they had a big black thing that they'd put over their head and they'd look in the back of the camera and…they would see the picture and they had a bulb they'd squeeze and have you look here and smile, turn your head this way or that way…”

William A. Redmond went on to earn a bachelor's degree in engineering from Marquette University and a law degree from Northwestern University. He and his wife, Rita, and their three children lived in Bensenville, IL where he practiced law. In 1959, he was elected to the Illinois House of Representatives, serving as Speaker from 1975 until 1980. He resigned his House seat in 1981. His career as a child model was featured in the June 20, 1977 issue of People Magazine. His oral history is available online at www.uis.edu/archives/oral.htm.

Coming Soon: Introducing the Tonnesen Models Part 3. Images and information about other models, most still unidentified but highly recognizable, who starred in Tonnesen’s work.