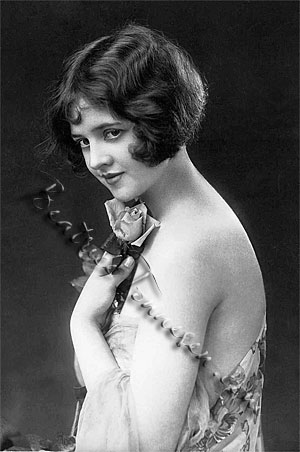 When I started this series last fall, I planned on using Part 3 to feature several unidentified models often seen in the works of Beatrice Tonnesen. The idea was to show them in a variety of poses, so that they can be identified by collectors who are trying to determine if the prints they own or may buy were done by Tonnesen. In addition, however, my hope was that someone, somewhere would recognize them, and share any information they might have regarding the early art photo business and how Beatrice Tonnesen created her art.

Since that time, however, I have tentatively identified two of the models I planned to feature. They are Irma Roche O'Dea and Adelyne Slavik. Their stories are more complete than the others, but all of the eight models featured here had one thing in common: They worked for the Tonnesen Studio. Their images are shown in Slideshow Album 9, in the order listed:

-Fox's Meditation Lady? My guess is that the woman shown in slideshow album 9, image #1 (also above right) is the woman on whom the Fox/DeForest print “Meditation” (album 9, image #2) was based, and that Fox painted her from a photo by Tonnesen. Several other images of this woman in similar poses are found in the Tonnesen Archive of the Oshkosh Public Museum, Oshkosh WI, including the third image in album 9 which was used on a 1928 calendar titled “A Popular Debutante.” 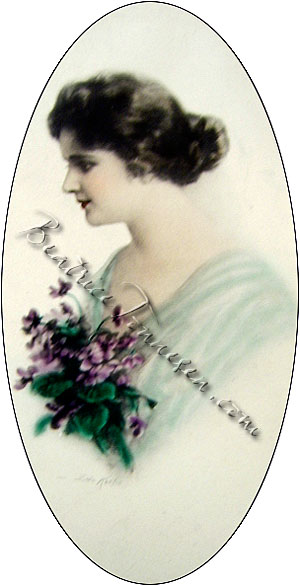 -Fox's Mother's Darling? See images 4-7 for compelling evidence that both the toddler and the mom (seen lower right) in Fox's “Mother's Darling” and “Armful of Joy” were Tonnesen models, probably painted by Fox from her photos. But who were these models who have come to be recognized as Fox's subjects?” My guess is the photos date to the early 1920's, so the toddler could still be living.

-Irma Roche O'Dea. Beautiful Irma (1891-1975), seen at right, seems to appear everywhere in popular art of the period leading up to and during World War I. If you are a collector, chances are you will recognize her as the demure epitome of Edwardian womanhood seen so often on calendars and other advertising items and framed prints. She worked for at least three photographers’ studios, including Tonnesen's. I also believe Irma posed -perhaps as both an artist’s and a photographer’s model – for several of Zula Kenyon's paintings. See images 8-16.

-THE Model. On being asked to identify this lovely woman from a photograph, 96-year-old former child model Betty Crowe exclaimed, “Oh yes, I knew her. She was THE Model!” Indeed, “THE Model” turns up often in Tonnesen's work ca. 1913-23, although it has occurred to me that there might have been two models, perhaps sisters, who looked very much alike. See her in images 17-19.

-Adelyne Slavik. I was viewing the archives of The Chicago Daily Tribune when I came upon a photo of professional model Adelyne Slavik in 1917, as she appeared in a Chicago fashion show. I thought I recognized her as the “mother” in several of Tonnesen's prints ca.1916-22. I could be wrong, of course. Sometime between 1923 and 1925 she married Julius Schwill, president of Chicago's Albert Schwill & Co malt manufacturing firm. In 1921, Schwill made news nationally when he was arrested for passing stolen money orders under an assumed name. He claimed successfully that he had not known they were stolen. 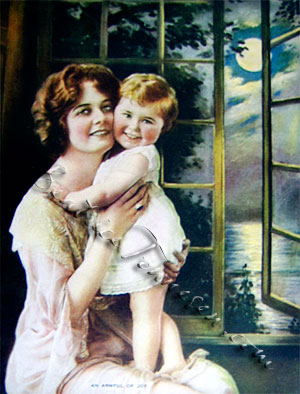 Julius Schwill died suddenly in 1938. The malt plant was sold to the Falstaff Brewery in the 1960's. Adelyne died in 1984, apparently never remarrying. Obituaries of Adelyne and her three siblings give no indication that any of them had children, so if she had photos or mementos of her modeling career, they may now reside outside the family. See images 20-24.

-Sincerely Yours. The lovely and enigmatic woman shown in the 1925 calendar print titled “Sincerely Yours,” attributed “From Painting by Tonnesen” (See slideshow album 2, image #25), is seen more often in Tonnesen prints than I first realized. Like most good models, she had a way of looking different for different roles. See images 25-27.

-The Barefoot Boy. R.A. Fox's painting titled “The Barefoot Boy” (See slideshow album 1, image #4) started as a photo by Tonnesen. The same boy, shown bottom right, turns up in other Tonnesen-like photos/prints from the early-to-mid 20's. Most likely born in the late teens, it is possible he is still living. See images 28-30. 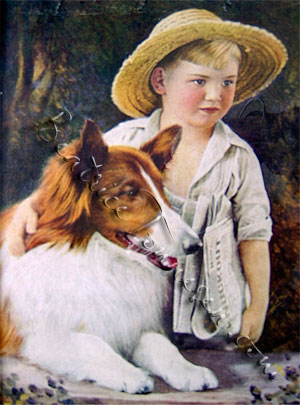 Notes: Please be aware the information accompanying these images, as with all images discussed on this website, represents only my best guesses as to identification of models, artists, publishers, dates and studios of origin. My guesses could be wrong, and I welcome the thoughts of others.

Thanks to Mary Redmond, and New York State Library Staff members Bernice Borgia and Joellen Peters for their archival search and retrieval of information on Irma Roche O'Dea and Adelyne Slavik.

Coming Soon: Part 4, the final part of this series -The earliest Tonnesen Models in their Victorian clothes and settings.