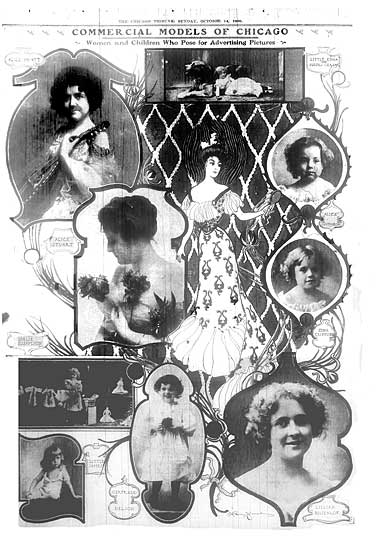 Around 1896, Beatrice Tonnesen opened her photographic art studio in Chicago. She quickly established herself as a favorite portrait photographer among the city’s high society. She also introduced the use of live models in advertising, becoming, by 1900, the country’s leading supplier of photographic advertising art.

Portraits and advertising aside, her circa 1900 art work became wildly popular as home decor. It seems to have consisted largely of elaborate and beautifully produced Victorian-themed parlor prints, as well as black and white prints sold to newspapers across the country for use as gifts to readers of Sunday supplements.

In 1903, Tonnesen promoted “The Famous Tonnesen Models” in an ad shown elsewhere on this site. (See “Beatrice Tonnesen Introduced New Trend in 1890 Advertising” by Sumner under “Tonnesen Business.”) Also, in 1900, the Chicago Daily Tribune ran a pictorial indentifying the “Commercial Models of Chicago.” This pictorial appears as Image #1 in Slideshow Album #11. The images that follow it show examples of Tonnesen’s Victorian parlor scenes, featuring several models who can be seen in the 1903 Tonnesen Model ad and/or the Chicago Tribune pictorial, which also gives the models’ names.

These models can also be found in the black and white Sunday supplement prints scattered throughout Slideshow Albums 2, 5, 6 and 10.