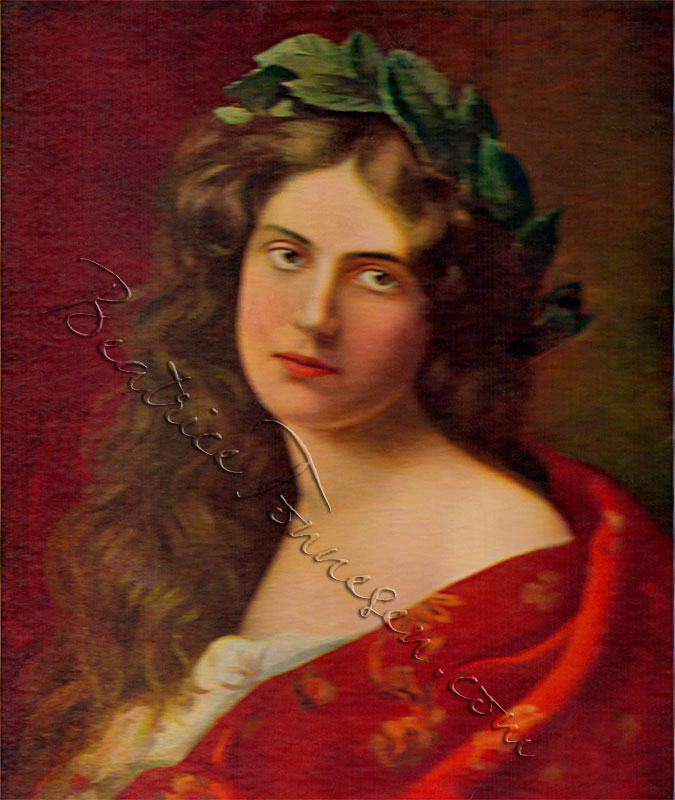 I recently had the privilege of viewing the “painting records” of the now defunct Thomas D. Murphy Calendar Company of Red Oak, Iowa. TDM was a frequent buyer of photos by Beatrice Tonnesen and, occasionally, of her paintings. In the case of the colorful calendar print shown here, I was able to trace its path from Tonnesen’s Studio in Chicago to the TDM Company.

The records reveal that the “copyright only” was acquired from Tonnesen for a “colored photograph” titled “Fedora” by the artist on 4/8/1904. Since Tonnesen took black and white photographs, I assume that either she or one of her staff members added the color. The TDM Company then retitled it “Muriel” and made it available in their 1905 calendar line for purchase by their customers, whose businesses were advertised on the calendars. The notation that only the copyright was purchased, seems to indicate that Tonnesen retained the actual colored photo.

It was very rare for a calendar company to use a piece of artwork as quickly after purchase as TDM used this one. In most cases, the length of time between copyright and publication on a calendar was at least two years. It was also rare for Tonnesen’s photography to be credited on the published calendar prints. In this case, the information under the print reads, left to right: Copyright 1904, The Thos. D. Murphy Co, Red Oak Iowa; M-4514 MURIEL; From Photo by Tonneson. (Note the misspelling of her name.)

My thanks to Rick and Charlotte Martin for facilitating and assisting my research.

« Slideshows now viewable on iPhone and iPad
Who was the Artist Behind the “A. Pope” Signature? »