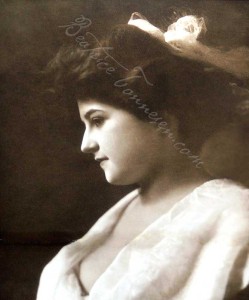 As detailed in my e-book, The Secret Source, Beatrice Tonnesen appears to have produced little, if any, new calendar art between around 1904, when she abruptly closed the Tonnesen Sisters Studio on Michigan Avenue, and around 1913, when she opened the new Tonnesen Studio on West Chicago Avenue. So imagine my surprise when I found the provocative “Olive” (included), complete with a glowing writeup, inside the Thomas D. Murphy Company’s book of calendar art samples for 1910. Copyrighted by TDM in 1908, the photo print, which occupies an entire double-page spread in the book, was offered only as a black and white, 8 X 10.5 inch image on a super-sized (14 X 22 inch) roll-up calendar.

I must say, I was shocked, not only by Olive’s timing, but by her attire, or lack thereof! Tonnesen was among several mainstream calendar artists who regularly produced what have been referred to as “pre-pinups” during the early part of the 20th century, romanticized portraits of beautiful women, sometimes in sheer or other mildly revealing gowns, considered risque at the time, but tame by later standards. But Olive, with her naked breast under her deeply V-necked gown, was certainly ahead of her time in the advertising calendar market, and must have caused quite a stir among the calendar buying public.

Whatever her reception by Murphy’s customers, the publishers seem to have been most pleased with their acquisition, showering praise on Tonnesen and her subject in their printed remarks: “As a photographic artist, no one in this country ranks higher than Beatrice Tonnesen. ‘Olive’ is an excellent example of her work. To compare it to the productions of an ordinary photographer is like comparing a Corot to a chromo. Note the perfection of feature, the play of light and shadow, the rounded contour of the neck and the charming poise of the head upon the shapely neck. One scarcely knows which to admire most, the beauty of the model or the cleverness with which Miss Tonnesen has posed her.”