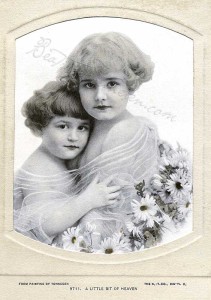 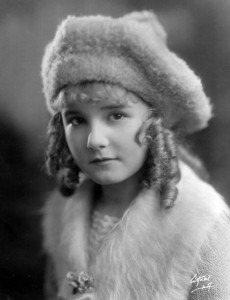 From online sources, primarily Wikipedia, I learned that Lucille was born Ingeborg Myrtle Elisabeth Ericksen, to Samuel and Ingeborg Ericksen in Chicago in 1910. Reportedly, she began modeling at age 4, joining the Chicago-based Essanay (silent film) Studio at around age 5 and, at some point, changing her name to Lucille Ricksen. Essanay began to shift production to California during the 1910’s, and Lucille’s mother took her to Los Angeles in 1920, where she worked in movies produced by Samuel Goldwyn, later Metro-Goldwyn-Mayer, and others. Wikipedia lists 36 films, some of them shorts, in which Lucille appeared in the five years between her arrival in Hollywood and her death there in March of 1925. Several months before her death, Lucille became too ill to work and was ordered to bed by her doctor. Her mother, who maintained a vigil by her bedside, collapsed and died in Lucille’s arms, only weeks before Lucille herself died! The most frequently reported cause of Lucille’s death was tuberculosis, but other sources suggest overwork and/or complications from an abortion.

Beatrice Tonnesen was a nationally known photographer, based in Chicago, specializing in photos of children during the timespan (1914-1920) when Lucille Ricksen was a leading child model there. So it’s very possible that Tonnesen photographed Ricksen. Around 1917, Tonnesen photographed and painted child model Virginia Waller (1913-2006) hugging an older girl who looks to me like Lucille Ricksen. Titled “A Little Bit of Heaven,” with an attribution to Tonnesen, the scene appeared on a 1919 calendar published by The K-T Co. of Cincinnati, Ohio. (Virginia Waller’s family owns a colored version of “A Little Bit of Heaven” bearing an original Tonnesen Studio inventory number.)

Here, for your comparison and consideration, is an image of “A Little Bit of Heaven” from my collection, followed by two internet images of Lucille Ricksen, one apparently from around 1917 and another apparently taken after she began to play adult film roles. So, what do you think? Was Lucille Ricksen a Tonnesen model?

UPDATE 1/16/14: After I published the above post, I emailed silent film biographer Michael G. Ankerich and asked him to take a look at “A Little Bit of Heaven” and give us his thoughts as to whether the girl on the right in Tonnesen’s photo is Lucille Ricksen. Ankerich is a biographer of the stars of early Hollywood and author of several books on the subject, including Dangerous Curves atop Hollywood Heels: The Lives, Careers, and Misfortunes of 14 Hard-Luck Girls, BearManor Media, 2010, which contains a chapter on Lucille Ricksen. In assembling his information on Ricksen, Ankerich worked with her family who provided him access to her photo album. Yesterday, Ankerich responded, stating “That is definitely Lucille. No doubt.” Many thanks to Michael Ankerich for sharing his expertise.