Home » Lois » Vintage Indian Maiden Prints: How Many Were Created in Tonnesen's Studio? 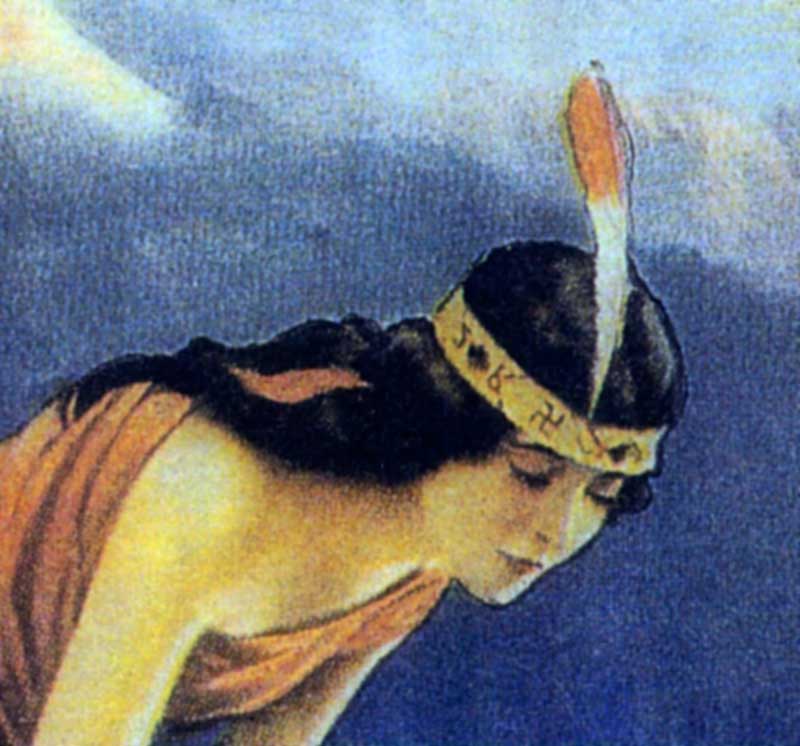 The basic design of this headband is very similar to that of the one that appears in Tonnesen's photo. In comparing the two, keep in mind that the headband would not always be placed on the head in the same position and that illustrators may have only approximated the original design in their final rendition. As with most of the photos and prints that I have examined, it appears the feather was added after the photo was taken. While it's impossible to say for sure, I think it's likely this print may have originated as a photo by Tonnesen.

Now, since the publication of our book, I have found additional evidence to support that theory. The evidence lies in the distinctive headband worn by “Wabano” in Tonnesen's archived photo. Recently, the great vintage art source Grapefruit Moon Gallery offered a large portrait of a woman dressed as an Indian maiden and wearing a headband identical to the one seen in Tonnesen's photo. The image was copyrighted by Gartner Bender of Chicago, a frequent publisher of Tonnesen's work. Shortly thereafter, I located a full-length photo print of the same woman, titled “Minnehaha”, copyright 1917 by Merchants Publishing Co. Kalamazoo, MI. Tonnesen often placed her photographic subjects in front of an illustrated background, as if the subject were sitting in front of a large mural. “Minnehaha” employs that same device with a very “Tonnesonesque” result.

It's possible that another photographer who was engaged in the production of such prints owned a headband identical to Tonnesen's. Nevertheless, the sum total of the evidence led me to wonder anew how many others originated as photos by Beatrice Tonnesen. I'll never have an answer to that, I'm sure, but to begin to get an idea, I went searching for that headband in prints in my (admittedly small) collection of Indian maidens, as well as in my copy of the indispensible guide to calendar art, Discovering America's Calendar Artists: Vintage Illustration 1900-1960, by Rick and Charlotte Martin.

The results of that search, and the images appearing to contain the headband that spurred it, are presented in the accompanying slideshow. Scroll over each image to read about its significance. Two notes to consider: 1. Wabano's headband is not the only one used by Tonnesen. “Whispering Waters” and “Winona” (shown elsewhere on this blog) appear to feature a different one, suggesting even more unidentified Tonnesens are out there! 2. Illustrators, Tonnesen included, were free to alter or paint over the details of all of the items of apparel worn by their photographic subjects. So, in many cases, the viewer may never know what the original item looked like. Still, it appears, the details of the original photo often survived the illustrative process intact or, at least, emerged with only minor alterations, allowing us to surmise its original appearance.