Home » Lois » What's up with the Tonneson Signature? 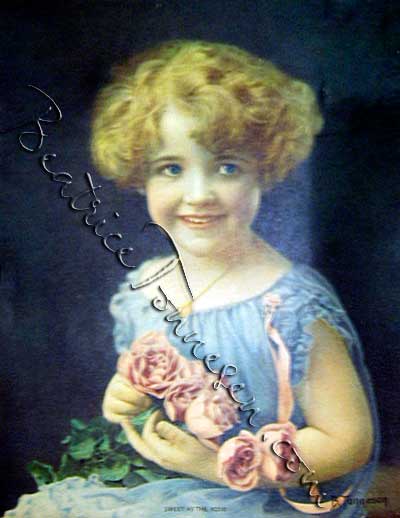 Two of the prints that appear in our slideshow are signed “Tonneson”, as opposed to the usual “Tonnesen.” These are “Miss Coquette” (Image 3, Album 1) and “Roses” (Image 13, Album 2). Both prints feature the same curly-haired little girl. Both are machine-signed.

Because the style of these prints is similar to the style used by R. Atkinson Fox in his portraits of children, and because Fox shared Tonnesen's studio during the 1920's when these prints were produced, collectors have speculated that Fox may have painted these prints from photos made by Tonnesen. The Tonnesen archive of the Oshkosh Public Museum contains the original black and white photo of “Miss Coquette,” as well as several other photos of the same little girl.

Regardless of Fox's suspected involvement, I've always leaned toward the theory that the publisher simply misspelled Tonnesen's name on these two prints. But now, I'm not so sure. I recently found a hand-signed Tonneson signature on yet another print of the same little girl (See above; closeup below). I can't see Tonnesen misspelling her own name! Even more intriguing is the fact that this particular Tonneson signature bears a striking resemblance to Fox's own signature! (Look especially at the letters “son” in each of the signatures below.) Now, I'm wondering if the “Tonneson with two O's” signature is a sort of code, denoting Fox's collaboration through his illustration of a Tonnesen photograph.

And why does this odd spelling of Tonnesen's name always appear on prints featuring this same little girl? I'm wondering if the little girl was Fox's daughter. He had two daughters who would have been the right age. Hazel, born in 1920, and Flo, born in 1919. Photos of the daughters as adults appear in R. Atkinson Fox His Life & Work, by Rita C. Mortenson on pages 14 and 17. Call me crazy, but… Flo's curly hair – curled down onto her forehead – her twinkling eyes and smile, and her defined cheekbones all look like Miss Coquette to me! If you have the book, it might be fun to check it out.

One thought on “What's up with the Tonneson Signature?”