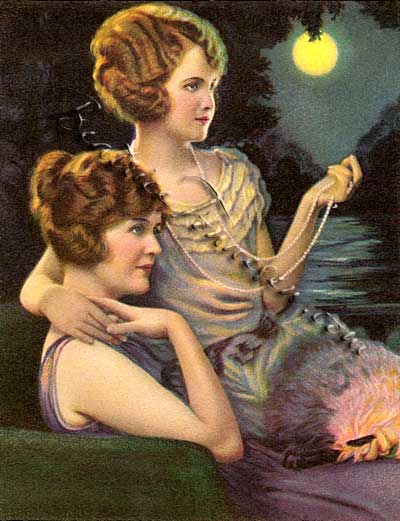 Popular illustrator Charles Relyea (1863-1932) was especially known for his colorful calendar art featuring glamorous flappers and Indian maidens. Some of his works appear to feature real women who modeled for Beatrice Tonnesen.

In Relyea's “Two Hearts that Beat as One”, right, the beautiful brunette flapper (foreground) looks to me to be the same woman who is shown in the original painting from a photo by Tonnesen that appears in the post dated February 24, 2009 directly below this one. (Scroll down to compare.) It’s also possible that the blonder woman in both images is the same, although I’m less certain about that.

Relyea's “A Duet in the Moonlight”, below right, features two lovely flappers, one of whom appears to be Chicago-based photographic model Adelyne Slavik. I strongly suspect she was one of Tonnesen's models. (For evidence, see Catalog Album 9, images 20-24.) 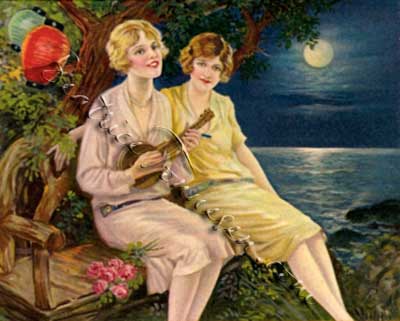 Compare Relyea's woman in the yellow dress in “Moonlight” with the photo, left, of Adelyne as she appeared in the June 27, 1921 issue of The Bridgeport Telegram. (Adelyne made news in The Telegram, as well as other newspapers across the country, when she came to the defense of a former beau, millionaire J. Stanley Joyce, who was embroiled in a messy divorce trial with notorious gold-digger Peggy Hopkins Joyce. But I digress…)

2 thoughts on “Did Charles Relyea Paint from Tonnesen’s Photos?”