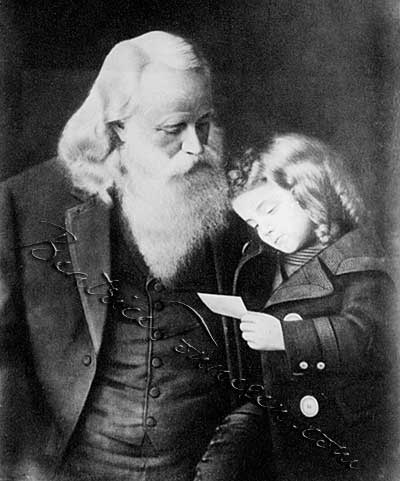 Lee Griffin, of Oregon, has written to tell us that white-haired, bearded “Father Time” in the print of the same name shown in our Slideshow Album 5, Image 20, was his wife's great-great-grandfather, Henry Martyn Bates (1833-1902). Mr. Griffin provided the following information.

Henry was born in Hudson, Ohio and moved with his parents to Pecatonica, IL sometime in the early 1850's. His first wife, Irene Rogers, died in childbirth in 1870. His second marriage ended in divorce. There is some evidence that he had a third wife. When he arrived in Chicago is unknown, however he died there in February of 1902. Tonnesen's images of Henry appear to have been taken in the late 1890's. A diary kept by Henry's son Isaac, indicated that he had received a letter from the Tonnesen Sisters and pictures of his father in March of 1902.

Mr. Griffin also kindly sent two images of Henry that have been handed down through the family. Neither is signed, but they look to me like Tonnesen's work. Interestingly, one of the photos shows Henry with his grandson, Douglas Bates, who was born in 1893. After studying the image, I believe that Douglas may have also modeled for Tonnesen, although he lived in Detroit and probably did not visit Chicago regularly. (Go to Album 11, Image 6 to compare “The Little Musician” with the image of Douglas Bates shown here.) 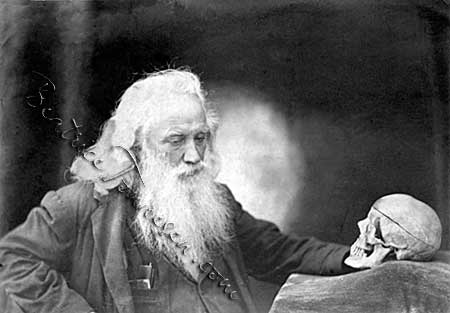 Shown at right are the two images provided by Lee Griffin, the first showing Henry Martyn Bates with Douglas Bates, and the second showing Henry with a skull. This photograph seems to have been inspired by the Albrecht Duerer painting of St. Jerome.