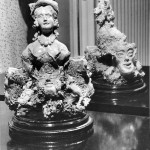 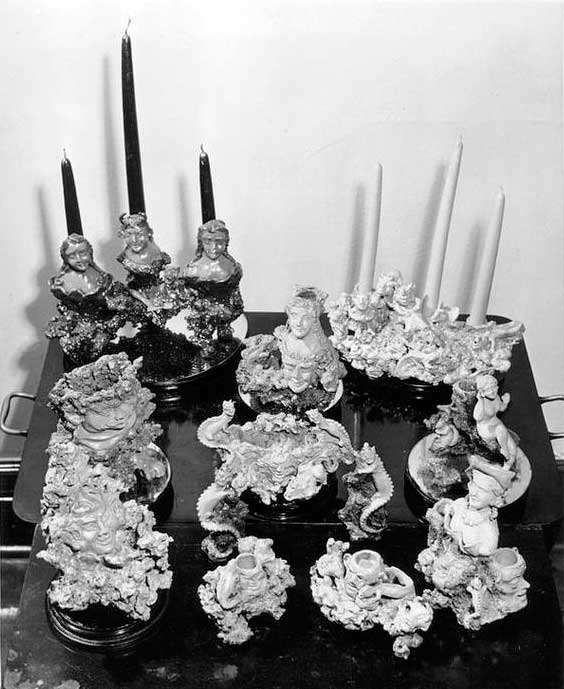 In 1930, Beatrice Tonnesen retired from her career in Chicago as a nationally known artist-photographer, and returned to live with her sister, Clara, in their childhood home in Winneconne, Wisconsin.  Nearly two decades later, Tonnesen re-emerged on the national scene as the creator of “Marsware”, ceramic art objects fashioned from coal clinkers, the residue dug from her home furnace!  Reportedly, she was fascinated by the unique shapes of the clinkers and conceived the idea of adding clay and paint to create flower pots, candle stick holders and even necklaces, all adorned with sculptures of  people and animals she imagined as Mars dwellers.  Her craft was considered unique enough that it was the subject of a 1949 film short titled “Unusual Occupations,” produced by Paramount Pictures and shown in theaters nationwide.Having never seen a piece of Marsware, or even a detailed photo of one, I was excited, recently, to be able to buy a series of five press photos, showing Tonnesen in 1946 with her curious Marsware creations.  The photos, shown in the slideshow at right are all stamped:Acme Newspictures, Inc.461 Eighth Ave. New York CityPlease Credit “Acme Photo”This picture is sold to you for your publication only and must not be loaned, syndicated or used for advertising purposes without written permission from us.The photos came complete with titles and captions which can be seen by rolling your cursor over each image.  Does anyone out there have any actual examples of Marsware?  At least now we know what they look like, should we run across one at a garage sale!Copyright 2012 Lois Emerson
« Tonnesen’s Photo of Mother and Child Became 1901 Soap Ad
BT Photos Used in McCormick-International Harvester Ads »