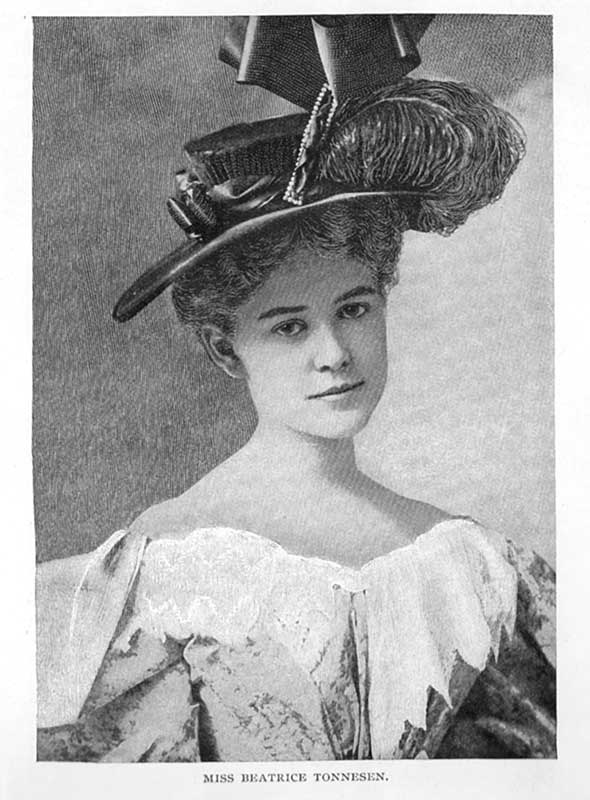 ◄ Back
Next ►
Picture 1 of 6
The Puritan, A Magazine for Gentlewomen, published in November, 1897, contains a feature story on Beatrice Tonnesen titled “A Woman Artist of the Camera” by Eleanor Gilliland.  The story and a photo spread featuring six pictures by Tonnesen occupy pages 62 and 63 of the issue.  Gilliland’s story is not much different from others published during the first few years of Tonnesen’s career in Chicago, praising her art and marveling at her almost instant success in advertising and photographic art.  But, two things stand out.

First, Gililand provides a who’s who of public figures who sat for Tonnesen’s camera – among them Mayor Carter Harrison of Chicago, Illinois Governor Altgeld, Governor Peck of Wisconsin and author Lillian Bell (and here).  Second, Gililand never mentions Beatrice’s sister, Clara Tonnesen Kirkpatrick, who was, at that time, the business manager half of the team that made up the Tonnesen Sisters Studio.

The six photos shown in the slideshow at right are attributed “From photographs by Miss Beatrice Tonnesen, Chicago.”  They are:  Self portrait by Tonnesen.  (This image was used extensively at the time in news articles.  But this one looks as though a unique pen and ink effect was added.), “Miss Lillian Bell,” “A Maid of Arcady,” “Summer,” “At the Spinning Wheel,” and “Study of a Head.”  The last four are labeled “Specimens of Figure Work With The Camera.”

I have never seen any of these as published prints before, although “A Maid of Arcady” and “At the Spinning Wheel” feature backgrounds used by Tonnesen in several other prints.