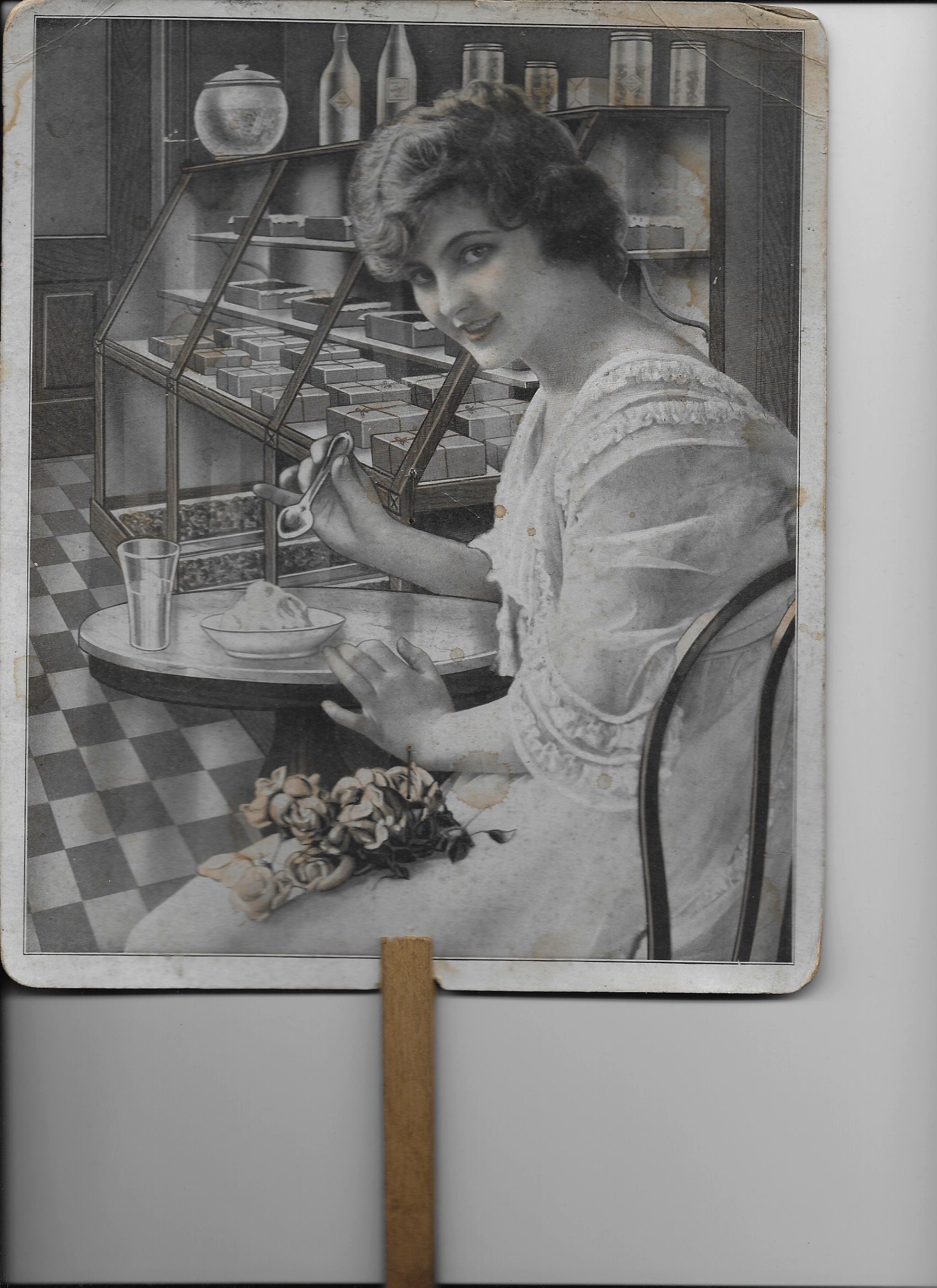 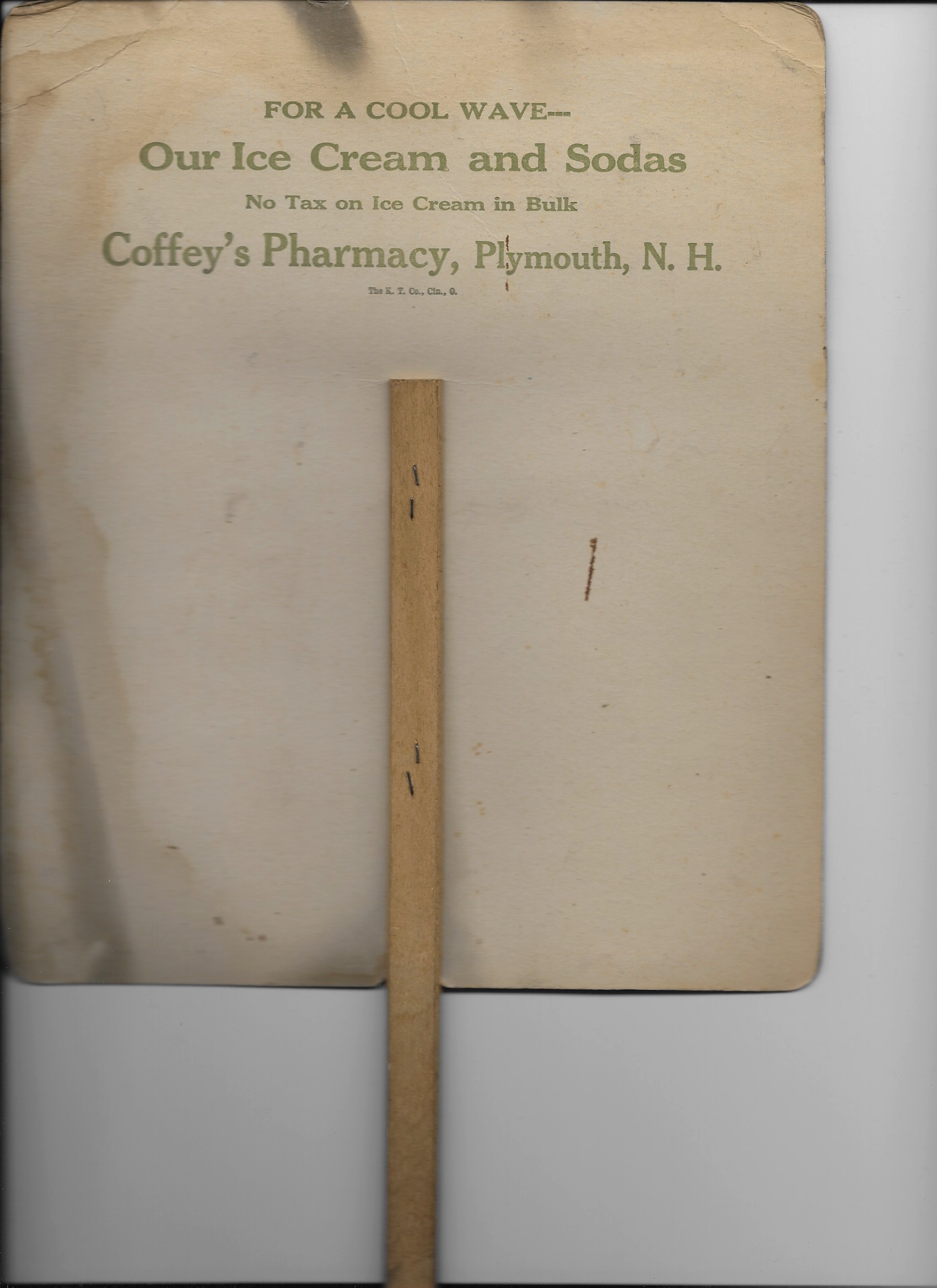 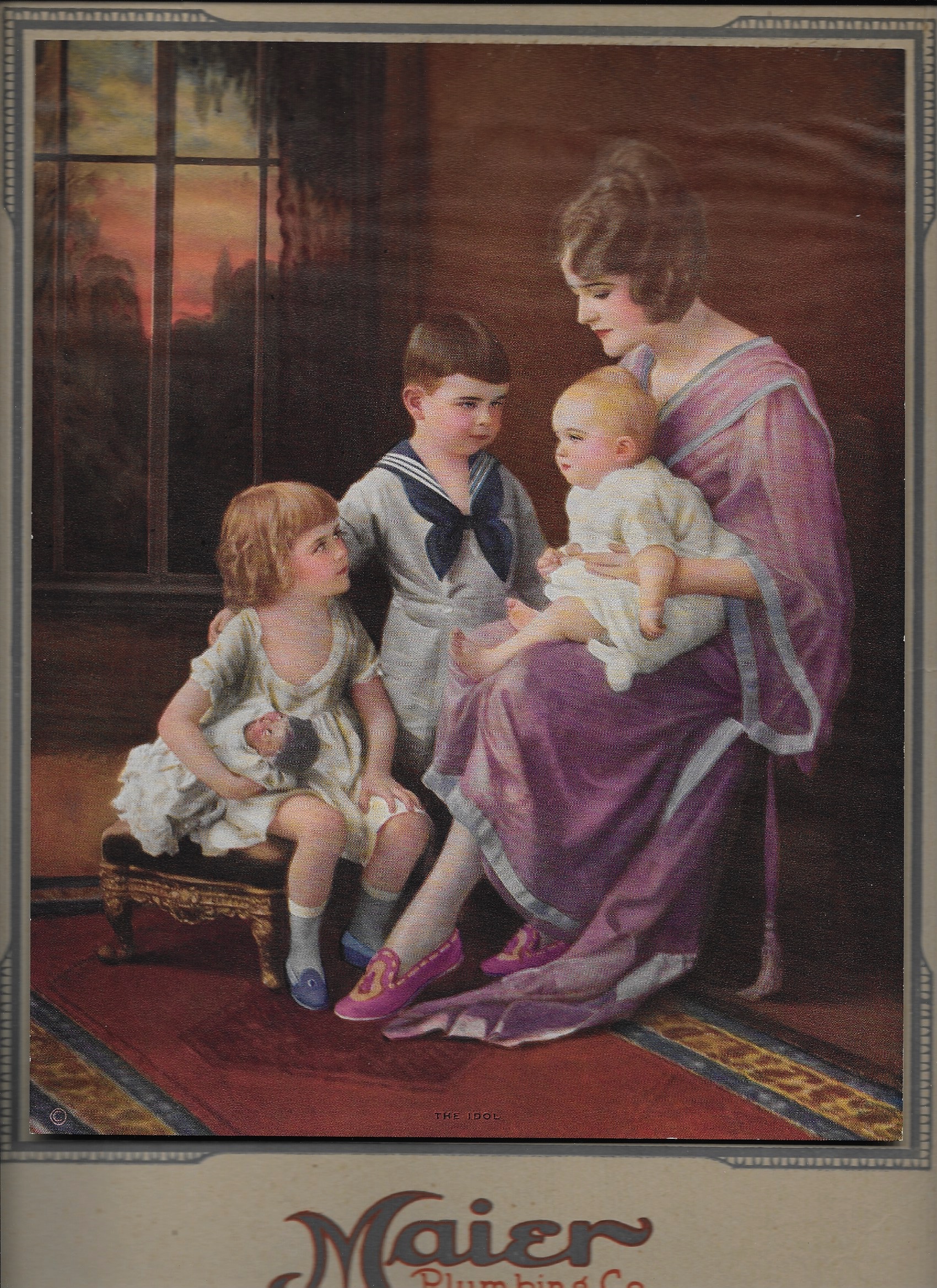 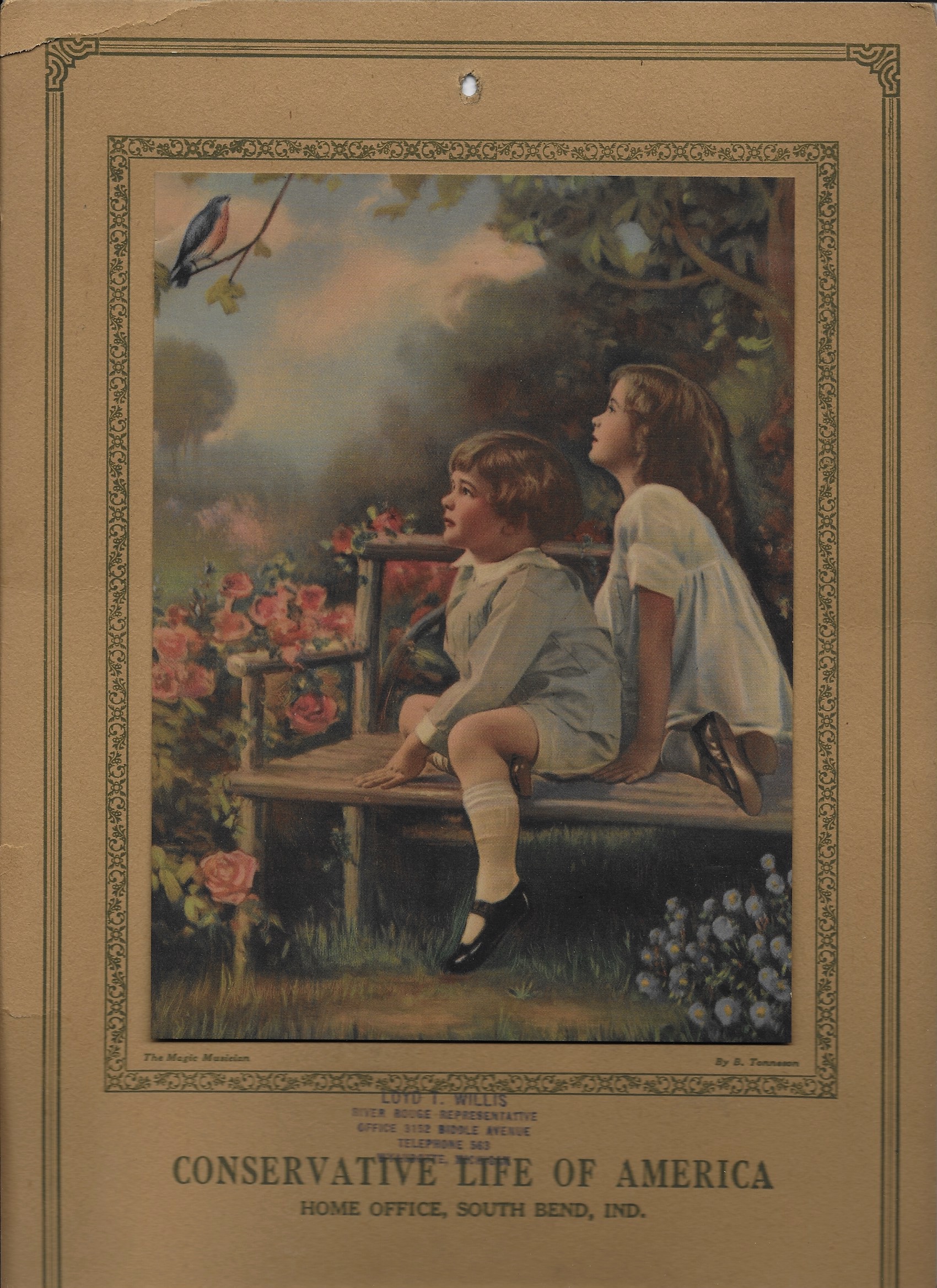 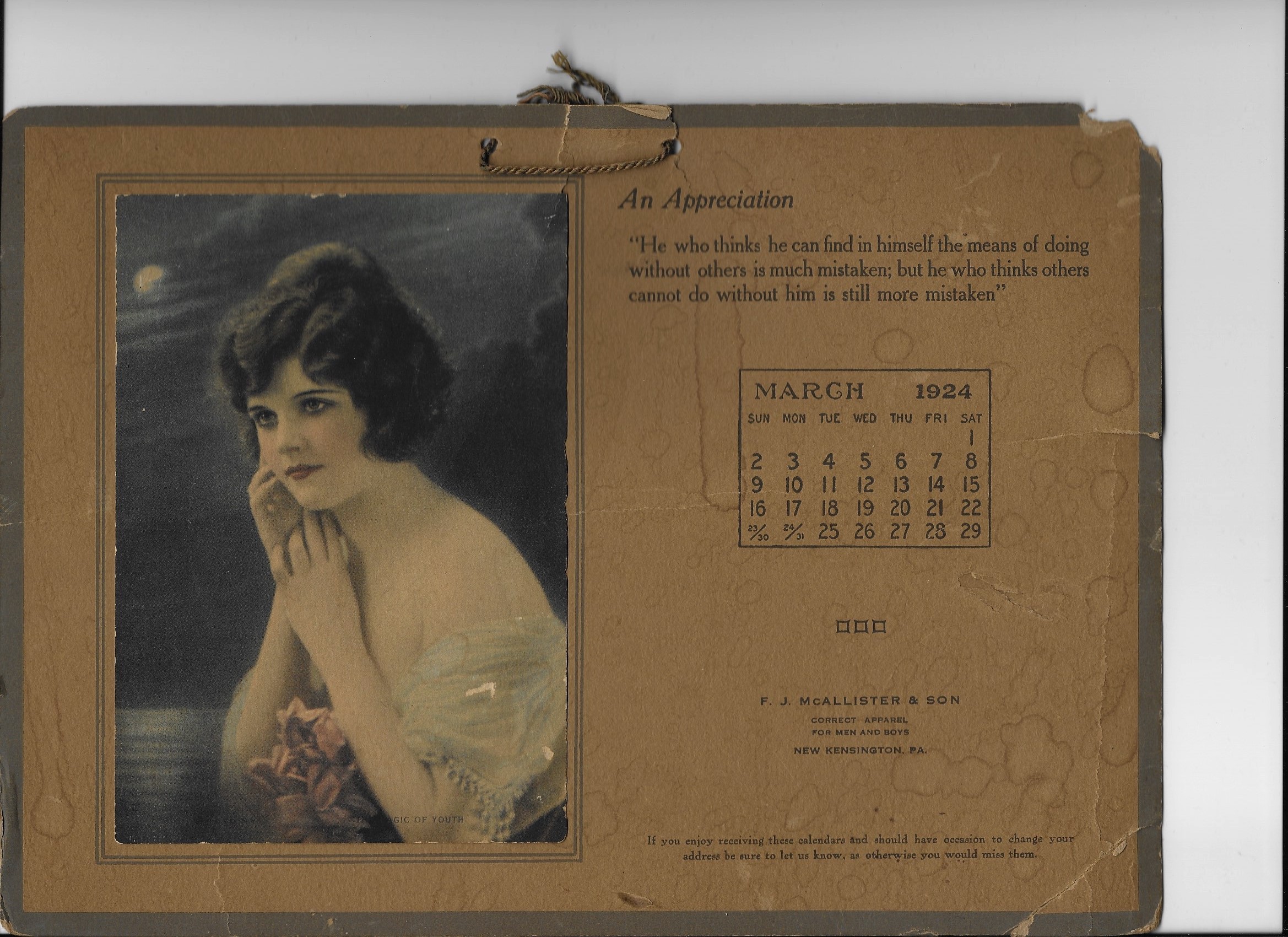 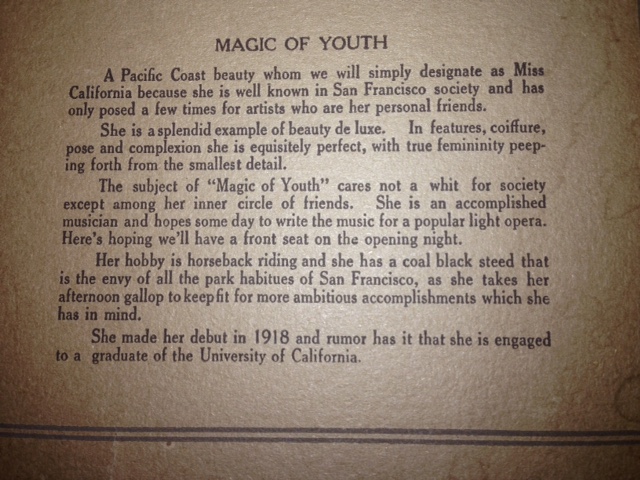 Over the last several months, I’ve been concentrating on getting the site maintenance needed to continue to present this blog. With the help of an outside contractor, we have managed to get the galleries back up and running and restored images on individual posts that, for reasons not understood by me, had simply disappeared. With that technical work mostly behind us, it’s fun to get back to simply presenting Tonnesen’s enchanting creations! Here are four newly-discovered examples of her advertising art. In this order, they are:

-Ice cream-themed advertising fan for Coffey’s Pharmacy, Plymouth, New Hampshire. This woman appears in several of Tonnesen’s archived photos, sometimes wearing this same dress, around 1920. The dress and the roses are seen often in Tonnesen’s work. The photo seems to have been superimposed onto the illustrated background.
– Back of the Coffey’s Pharmacy fan.
– 1927 calendar featuring a print titled “The Idol,” advertising the Maier Plumbing Co. All of these models appear in confirmed photos by Tonnesen in the early 1920’s. The stool, doll and Mom’s dress are all Tonnesen props. The scene outside the window is typical of other scenes/backgrounds in Tonnesen’s work, making me wonder if she did the illustration as well as the photography.
-“The Magic Musician” shown on a 1931 calendar advertising Conservative Life of America, attributed “B. Tonnesen” on the calendar mat. This print is somewhat of a mystery to me. Outside of the fact that the boy can be found in other confirmed photos by Tonnesen taken in the early to mid-1920’s, I can’t find anything else that I would describe as “Tonnesen-like.” Until I saw the attribution, my guess was that it was done by Adelaide Hiebel (1885-1965), who did a series of prints featuring children and bluebirds. That was a very successful series, so it’s possible that Tonnesen decided to jump on the bandwagon. It’s also possible, though unlikely, that the publisher made an error in the attribution.
– “The Magic of Youth” found on a 1924 calendar advertising F.J. McAllister & Son Correct Apparel for Men and Boys, New Kingston, PA. The original photo from which this print originated is part of the Tonnesen Archive of the Winneconne Historical Society, Winneconne, Wisconsin.
– This “bio” of the model in “The Magic of Youth” is almost certainly fictional. The print on the calendar lifts up to reveal it underneath. These modest, but glamorous, “pre-pinup” era prints of beautiful women were sometimes accompanied by romanticized biographies, probably concocted by the publisher’s copywriters, portraying the models as non-professional, girl-next-door types that the advertiser’s mostly male clientele could dream of meeting in real life. And Tonnesen worked out of her studio in Chicago, not the Pacific Coast, and was known to use local models.
Copyright 2017 Lois Emerson

« Have We Found Yet Another Tonnesen Model?
Glimpses of History: These Pieces of Art Are Unusually Informative »
Site Secured By: Website Guardian
Site Maintained By: Computer Geek