Home » Lois » Glimpses of History: These Pieces of Art Are Unusually Informative 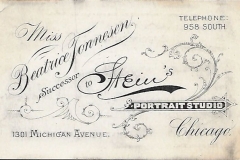 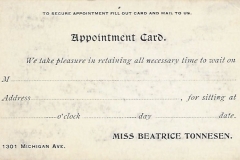 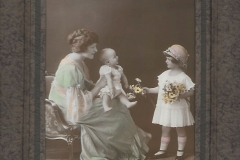 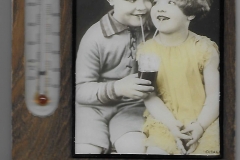 In the last few months, I’ve been lucky enough to find three uniquely informative creations by Beatrice Tonnesen. It’s always a treat to find items I haven’t seen before, but it’s especially rewarding when they turn out to contain information that illuminates my glimpse into how she worked.

-The elaborate business/appointment card,shown here front and back,must date back to about 1896, when Beatrice and her sister Clara, who functioned as Beatrice’s business manager, moved from Menominee, Michigan to Chicago to take over the studio of the prestigious society photographer S.L.Stein (1854-1922). Since the card touts Beatrice as Stein’s successor, it’s reasonable to assume it was created early in the life of the studio which became known as the “Tonnesen Sisters.” Tonnesen Sisters Studio flourished and gained nationwide fame until about 1904, when it was abruptly announced the studio was bankrupt, with claims by creditors totaling $650! Subsequently, Clara returned to Oshkosh, Wisconsin, where the sisters had grown up. Beatrice, apparently, continued successfully, working solo until about 1930, likely at first from her home in Chicago and, later, from two more studios in the city.

-The beautiful 1922 calendar shown here is a perfect example of the popular “Cult of Motherhood” theme that exalted home and family in the art of the early 20th century. Besides producing a beautifully tinted photograph on a quality, heavy cardboard mount, the publishers provided a very thorough identification -much appreciated by me- of the artwork. Titled “Baby is King” and copyrighted in 1920 by American Artworks Coshocton, Ohio, it is identified as a “Study by Tonnesen Studios.” (The use of the word “study” in popular calendar art is interesting. I’ve seen only one other photo by Tonnesen described that way.) This photo was probably taken around 1917, based on the presence of one of Tonnesen’s favorite child models, Virginia Waller (1913-2006). Virginia modeled, mostly for Tonnesen, from about 1916-1920. The woman in the photo, believed to be nationally-known professional model Adelyne Slavik (1892-1984),often portrayed Virginia’s mother.

-The third item is an interesting advertising piece for Bayerman Furniture and Undertaking(!), with a photo on glass, mounted on wood, with a thermometer and a 1929 calendar. The photo shows a boy and girl who appeared in a series of photos featured on calendars during the late 1920s and early 1930s. I had been wondering when the photos of this couple were actually taken, because newspaper ads indicate that Tonnesen had begun selling her photographic equipment around 1927 in preparation for her retirement in 1930. So I found it very helpful to discover the tiny copyright date etched at the bottom right in this glass: 1926! Both the Oshkosh Public Museum and the Winneconne (WI) Historical Society have original photos from this series.