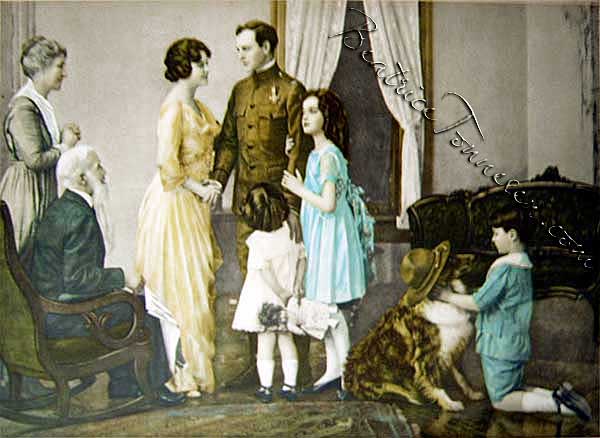 This amazing World War I- themed photo contains seven Tonnesen models, as well as the distinctive-looking collie often seen in Tonnesen's work. During WWI (1914-18), scenes of families welcoming their loved ones home or seeing them off to war were extremely popular.

Moving left to right, the following can be noted in this gem of a photo:

The older woman at left is also shown, wearing the same dress, in a photo from the Tonnesen Archive of the Oshkosh Public Museum. Her husband (who may be a younger man in disguise) sits in a rocking chair which can be seen in the shot of Tonnesen's studio shown elsewhere on this website.

The younger woman in yellow was reportedly named Jean Blackwell, but I have no further information about her. The man portraying the soldier appears in other photos in the museum archive. The little girl is Virginia Waller (1913-2006) and she is holding a doll found often in Tonnesen prints.

I have only one other confirmed Tonnesen photo containing the image of the beautiful older girl who is holding the soldier's arm. But portraits of her can be found frequently on art postcards of the era. She appears to have been older than William Redmond (1908-1992), who is kneeling at right, playing with the “Tonnesen” collie.

Virginia Waller did not begin modeling until 1916. WWI ended in 1918, so I would date the photo between those years.