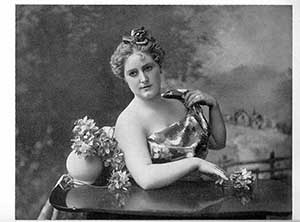 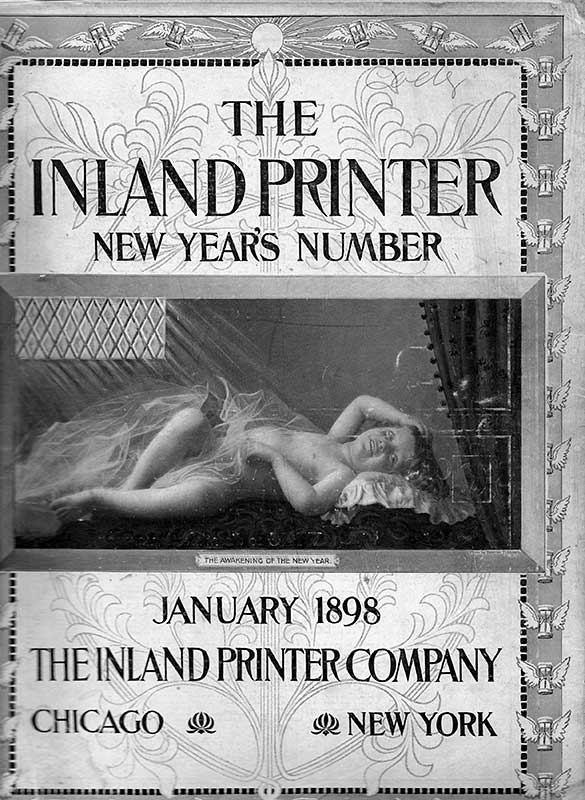 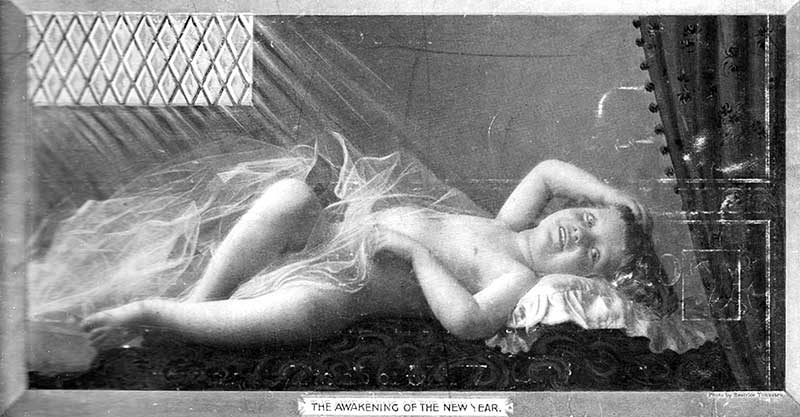 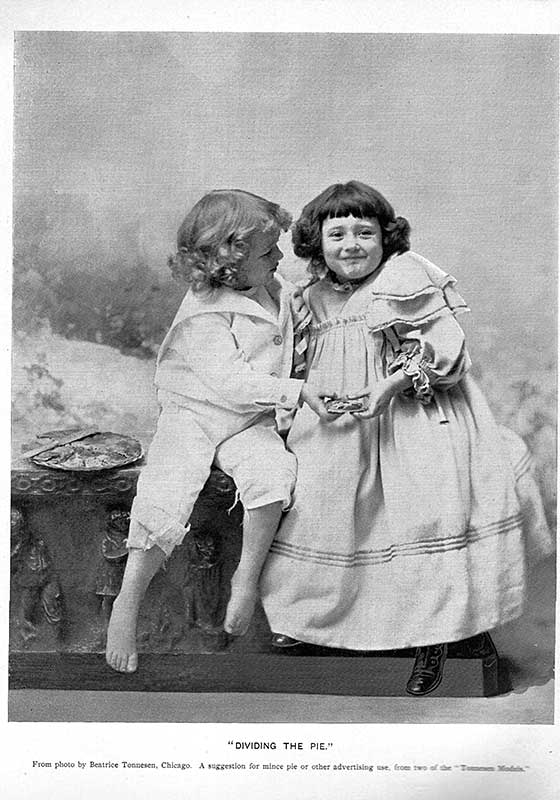 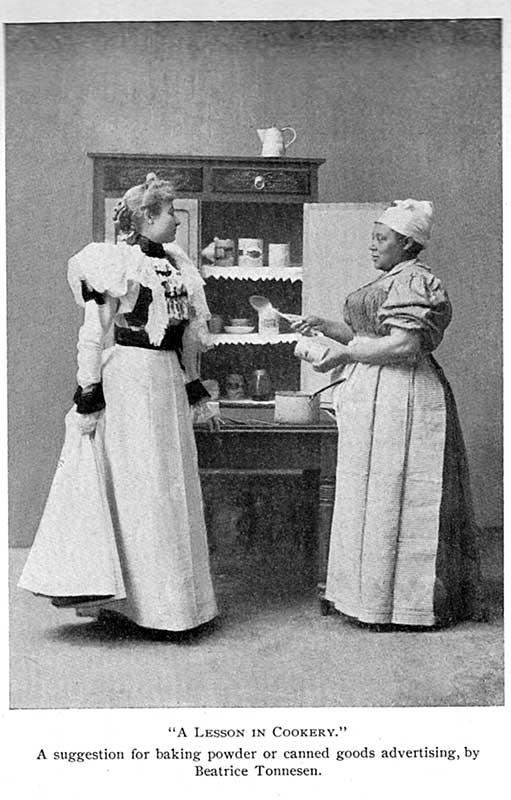 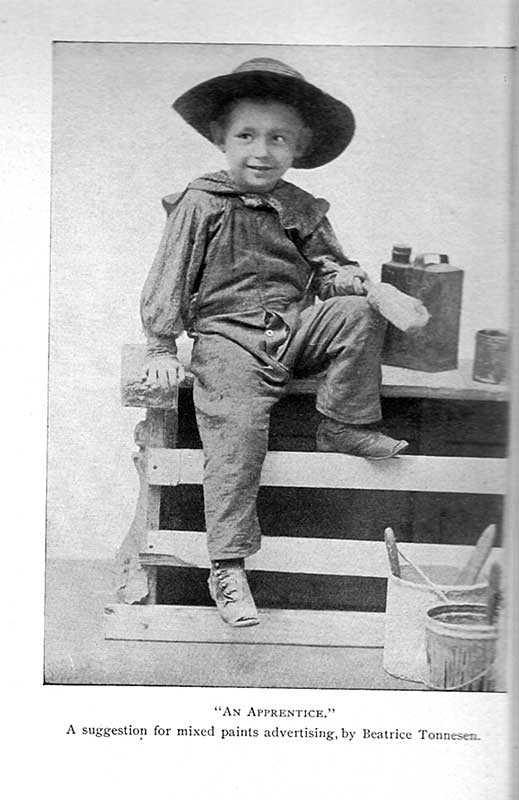 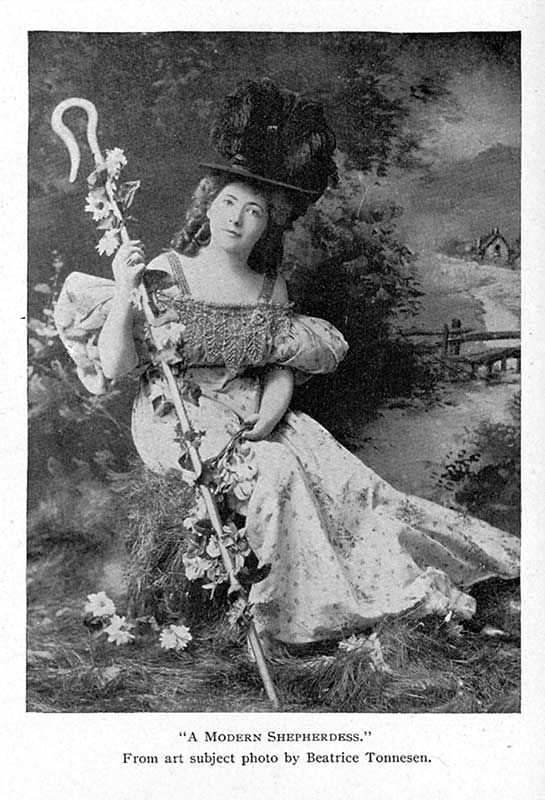 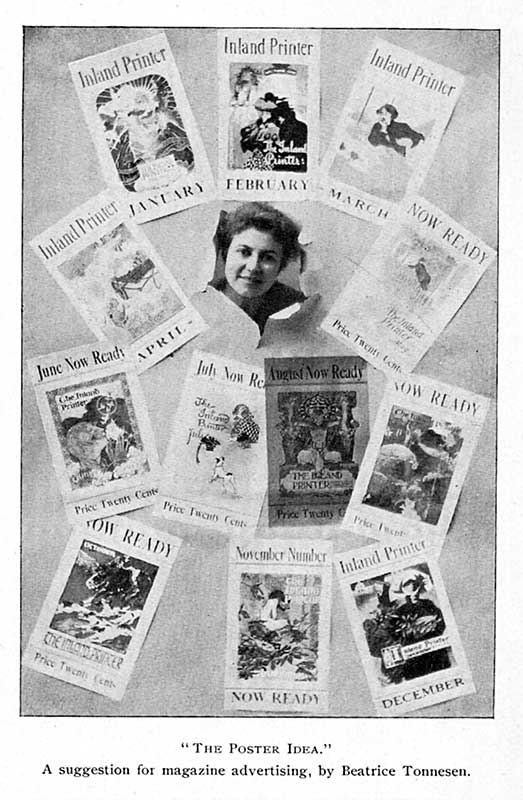 “The Inland Printer,” a leading graphic arts journal of its time, devoted the cover of its January, 1898 issue, and several interior pages, to the art of Beatrice Tonnesen. The magazine, which described itself as “a technical journal devoted to the art of printing,” was based in Chicago. In researching the publication, I came across the website MagazineArt.org, which describes its impact as follows:

The magazine was an extremely important influence in popularizing Art Nouveau and a general improvement in the artistic quality and design of printed materials in the United States, beginning in the 1890’s.

(Actually, I found other online references to its existence ranging from 1883 to 1974.)

In an article titled “Photography for Advertising Uses,” the editors opined that the time had come for professional photographers to try new ideas and to “throw more art into (their) calling.” And they hailed Beatrice Tonnesen’s recent introduction of photographic art into advertising as an example of just such an achievement. To demonstrate their point, they included illustrations and half-tones of several of her art photos, as well as several of her advertising suggestions – sample ads built around photographs created for commercial purposes. I’ve found examples of Tonnesen’s art photos, as well as ads run by the Tonnesen Sisters touting their own advertising work, in other issues of “The Inland Printer.” But, I’ve never found such an extensive presentation of her advertising art. I feel very lucky to have been able to acquire this issue, and am happy to be able to share its feature story and the very rare images that accompany it, via the slideshow at right. (Note: For easier reading of the feature story, see the reprinted text below.)

Text of “Photography for Advertising Uses,” The Inland Printer, January 1898:

Photography at present has many votaries. From the “button presser” with his five-dollar camera, content to snap at everything in sight and let the other fellow “do the rest,” to the most enthusiastic professional, equipped with the latest and costliest paraphernalia, the field is well taken up with varying grades of photographic talent. To the amateur who loves his art “for art’s sake,” who labors diligently to perfect himself in its many charming intricacies, must be ascribed the honor of a goodly numberer of the discoveries that have given photography such a forward impetus. Not that the professional does nothing in this direction. Far from it. But the amateur very often has the time, the inclination, and the money to devote to experimenting which the professional finds utterly impossible to attend to in connection with his regular work.

The time has come, however, when even the professional, or, more correctly speaking, the working photographer – the one who depends upon his daily work for a living – must get away from the everyday routine of studio work and in some way throw more art into his calling, or take up new lines that others have not attempted, if he would lead in his profession. “Non-studio photography” is one of the means by which this can be accomplished. Flash-light pictures of people can by this plan be taken in their own homes, in the midst of those accessories that make a photograph so animated and realistic. Out-of-door groupings can be made on the lawn or porch of the summer home, or in other paces where natural surroundings lend picturesqueness and artistic opportunities. Non-studio photography is not, however, the only means by which renown and a fair remuneration for one’s services can be secured, and it is not always convenient to take up non-studio work. Proper study and work in the studio, with the assistance of the best models, backgrounds and accessories can accomplish much. This very thing is being successfully done in Chicago, my Miss Beatrice Tonnesen – a young lady not yet twenty-four, who has introduced such novel ideas into her work that she has challenged public attention and bids fair to shorty occupy a unique position in the art of photography.

Miss Tonnesen came to Chicago about two years ago from Wisconsin. She learned the rudiments of the art and obtained her first lessons in business in the towns of Oshkosh and Menominee. Yearning for a location where her talents could find wider scope, she selected Chicago as an inviting field for operation. She came, bought out a studio and entirely reorganized the business. Her regular studio work has always been signally successful, for no one has given more thought and study to posing, lighting, draping and the important points for attaining satisfactory results than she. While making a specialty of women and children, her work is by no means confined to these, and she has numbered among her sitters men who are famous in business, politics, and religion. The work with which this article deals more particularly, however, is Miss Tonnesen’s achievements in the way of introducing art pictures for commercial purposes, displaying in the good points of an article, and throwing into the back ground or entirely eliminating the bad ones – if there be such. For this purpose she employs number of models, each selected with the utmost care for the particular work intended, and costumed and posed to illustrate most effectively the subject for publicity. The results are uniformly pleasing. The reproductions of a few of the pictures shown herewith speak for themselves and exhibit the excellencies of her work. Some of the cleverest illustrated magazine advertisements today are made conspicuous by her efforts, for the photograph is often mightier than the pen or type in attracting attention.

She is ably assisted in her work by her sister Mrs. Kirkpatrick, who directs the business management of the establishment in a most energetic way, leaving Miss Tonnesen free to attend to the details of the studio and other matters of artistic import, without the distracting worries of business.

A number of examples of Miss Tonnesen’s work are presented in connection with this notice, all very clearly exemplifying the scope of her work; otherwise will be found in another part of the magazine. Attention is also called to the illustration upon the front cover, and to the half-tones in the headings on page 459 and on the editorial page.